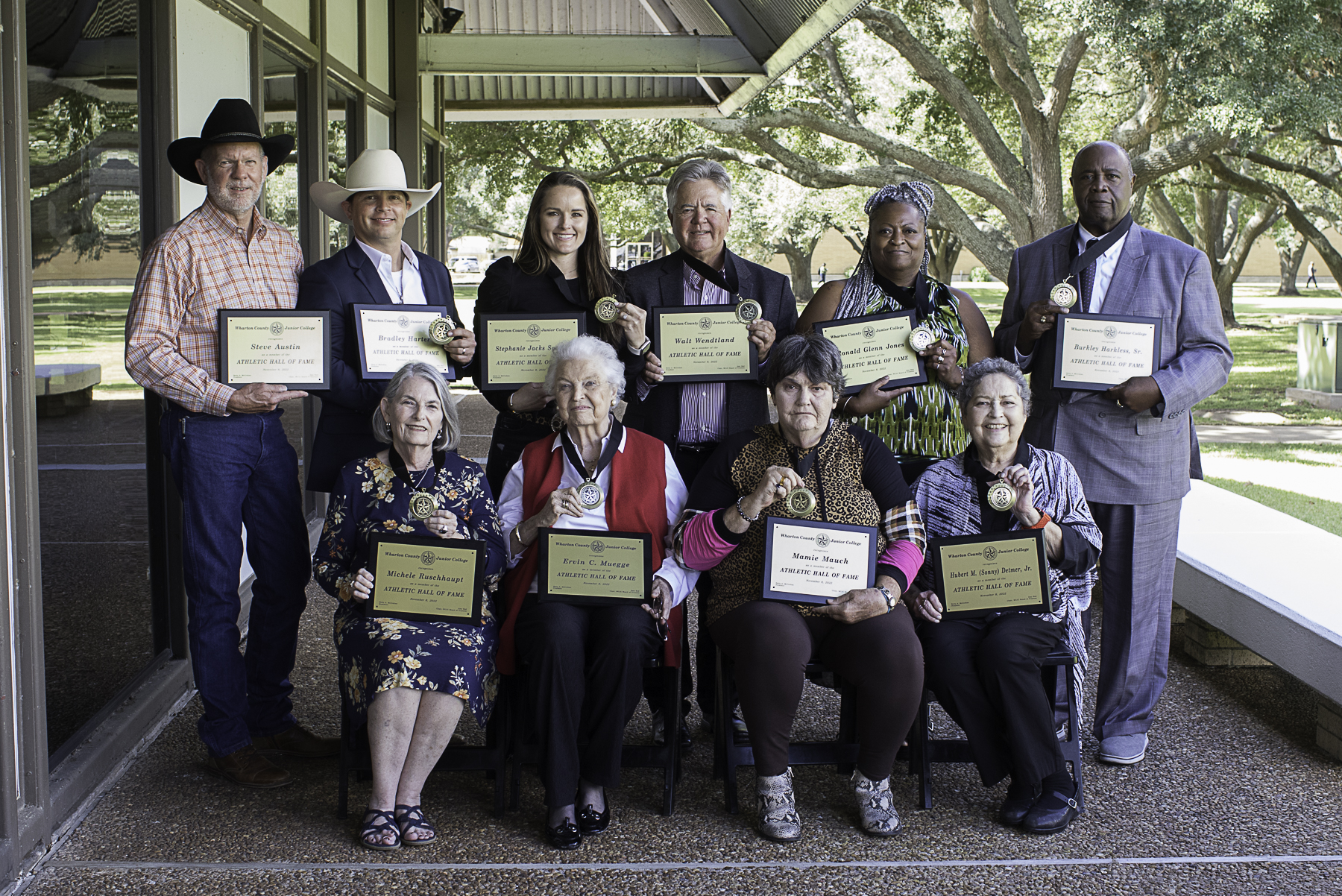 WHARTON, TEXAS – From a pro-circuit cowboy to a major league baseball player to one of the most recognized names in professional wrestling, Wharton County Junior College’s 2022 Athletic Hall of Fame inductees shared two things in common: excellence in their respective sports and a love for WCJC.

“WCJC means a lot to you and you mean a lot to us,” WCJC Athletic Director Keith Case told inductees during the recent reception luncheon and induction ceremony. “This college right here has your footprints all over it.”

During the ceremony, held in the Pioneer Student Center on the Wharton campus, each of the 10 individuals inducted into the Athletic Hall of Fame were recognized. Plaques of recognition were also installed on a permanent display located in the hallway outside the Gene Bahnsen Gymnasium. The plaques include each recipient’s name, years associated with the college and athletic affiliation. This year’s recipients were added to the 10 who made up last year’s inaugural class.

WCJC President Betty McCrohan welcomed the crowd, noting that the event was like a “homecoming.”

“We want to celebrate with you,” McCrohan said.

Case, serving as emcee, noted that inductees were chosen by a selection committee comprised of athletic department staff and long-time college instructors. He said the group had been faced with quite a challenge due to the nominees’ accomplishments. More than 100 nominees had been considered, with just 10 chosen.

Most of the inductees were in attendance, though several who are now deceased were represented by friends or family members. Perhaps the most notable inductee, retired professional wrestler and movie star “Stone Cold” Steve Austin, was unable to attend due to work obligations on the West Coast. His brother, Scott Williams, accepted the honor on his behalf. Steve Austin played football at WCJC from 1984-85.

“WCJC got him off the ground,” Scott said of his brother. “I’m really proud to accept this on his behalf.”

Retired professional cowboy Bradley Harter credited WCJC with providing the sort of foundation needed to embark on a successful career, one that included competing in more than 100 rodeos across the country. He specifically thanked WCJC Rodeo Coach Sean Amestoy for setting a good example.

“I was able to live my dream and raise a family and do what I dreamed of doing since the age of four,” Harter said. “I wouldn’t have been able to do it without WCJC and Sean Amestoy.”

Burkley Harkless Sr., a Bay City native who played football at WCJC in the mid-1960s, credited the college for his success as well. His career included playing with the Houston Oilers, Baltimore Colts and San Francisco 49ers.

“I experienced a lot of positive changes in my life and I wouldn’t be where I am today without WCJC,” Harkless said. “I really appreciate WCJC and want to thank God for his grace and for leading me in the right direction.”

Named to the 2022 Athletic Hall of Fame were:

To view images from the event, click on the following link: 2022 WCJC Athletic Hall of Fame Photos