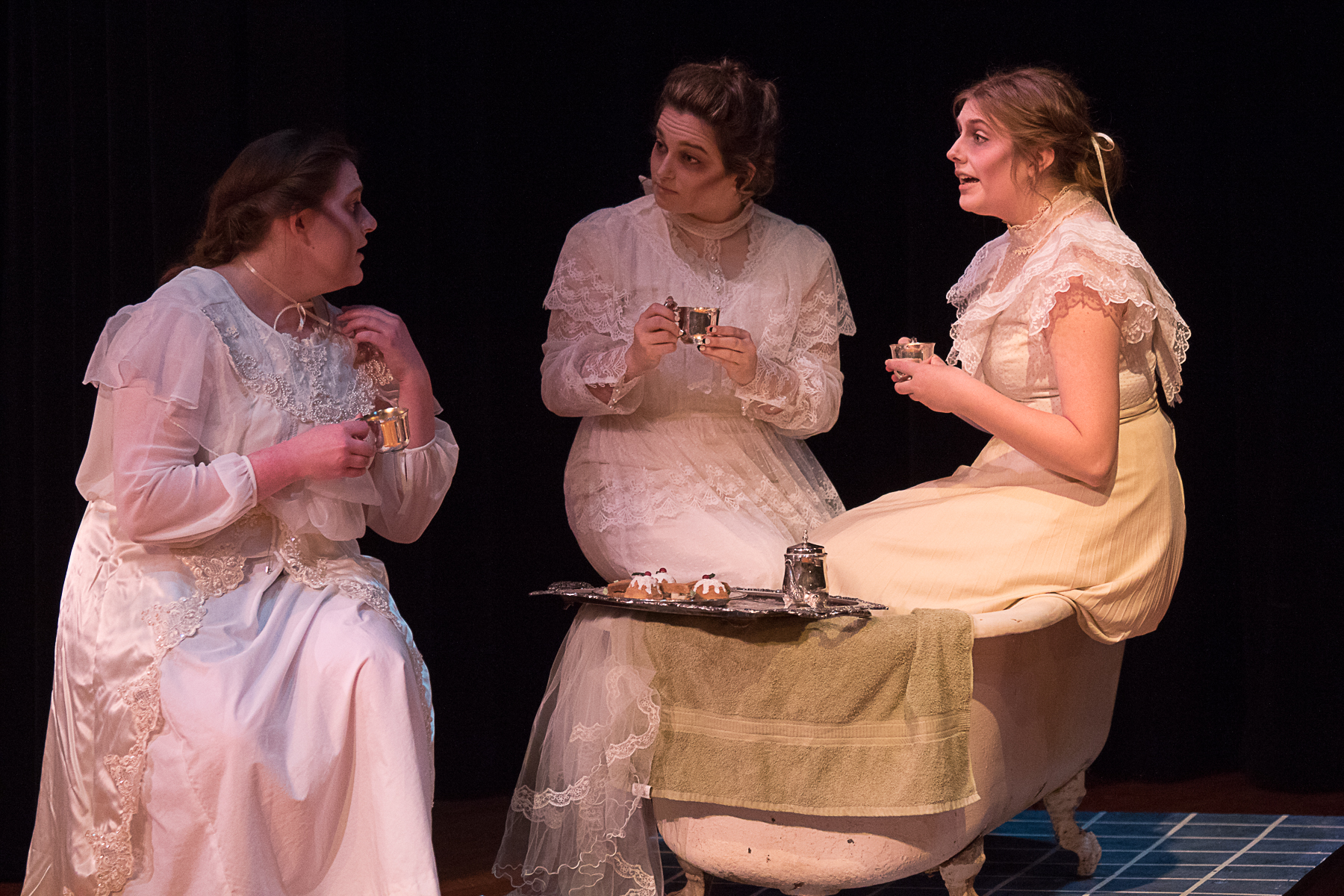 The Wharton County Junior College Fine Arts Department will present "The Drowning Girls" at 7 p.m. Feb. 25 through Feb. 27 at the Horton Foote Theatre in the Duson-Hansen Fine Arts Building on the Wharton campus. The show is free of admission and open to the public, but reservations are required and may be made by calling 979-532-6300. Pictured, from left, are Maggie Wandell of Needville, Madison Beyer of Palacios and Hannah Rader of Needville.

WHARTON, TEXAS – The real-life murders of three women in the early 1900s is the backdrop for the Wharton County Junior College Fine Arts Department’s first play of the 2021 season, “The Drowning Girls.”

The production is scheduled for 7 p.m. Feb. 25 through Feb. 27 at the Horton Foote Theatre in the Duson-Hansen Fine Arts Building on the Wharton campus. The show is free of admission but seating is limited due to COVID-19 protocols. Reservations are required and may be made by calling Vicki Hudson at 979-532-6300. Face masks will also be required to attend the show.

Written by playwrights Beth Graham, Daniela Vlaskalic and Charlie Tomlinson, “The Drowning Girls” is based on a trio of women who were murdered by the same man, George Joseph Smith, between 1912 and 1914. Smith’s modus operandi was to seduce the women, marry them quickly, get them to sign over all their possessions and then murder them by drowning them in bathtubs.

In the play, the women – now dead – meet each other and share the details of their common plight. They further share the dreams and hopes they possessed of living long, fulfilling lives with a man they believed loved them. It’s a poignant, sorrowful account.

WCJC Instructor of Drama Jami Hughes said the play piqued her interest, with its true-crime angle and macabre setting.

“It’s all my favorite things together,” she said.

The production is uniquely concise, with water-filled bathtubs dominating the set and only three actresses playing all the parts. Hughes said it was an ideal production considering the ongoing COVID-19 pandemic and her current cadre of students.

“I was looking for shows with small casts of women that could be socially distanced,” she said.

Tackling the roles of Bessie, Alice and Margaret are Hannah Rader of Needville, Maggie Wandell of Needville and Madison Beyer of Palacios, respectively. The student actresses vividly express the inner emotions and sorrow of their characters with a haunting candor. Throughout the production the actresses emerge from the crypt-like confines of their bathtubs to share their dreadful story with the audience, taking turns playing the roles of police investigators, jurors, family members, and even the murderer himself.

It’s a production that will not soon be forgotten.

“I wanted something interesting and new and avant-garde,” Hughes said.