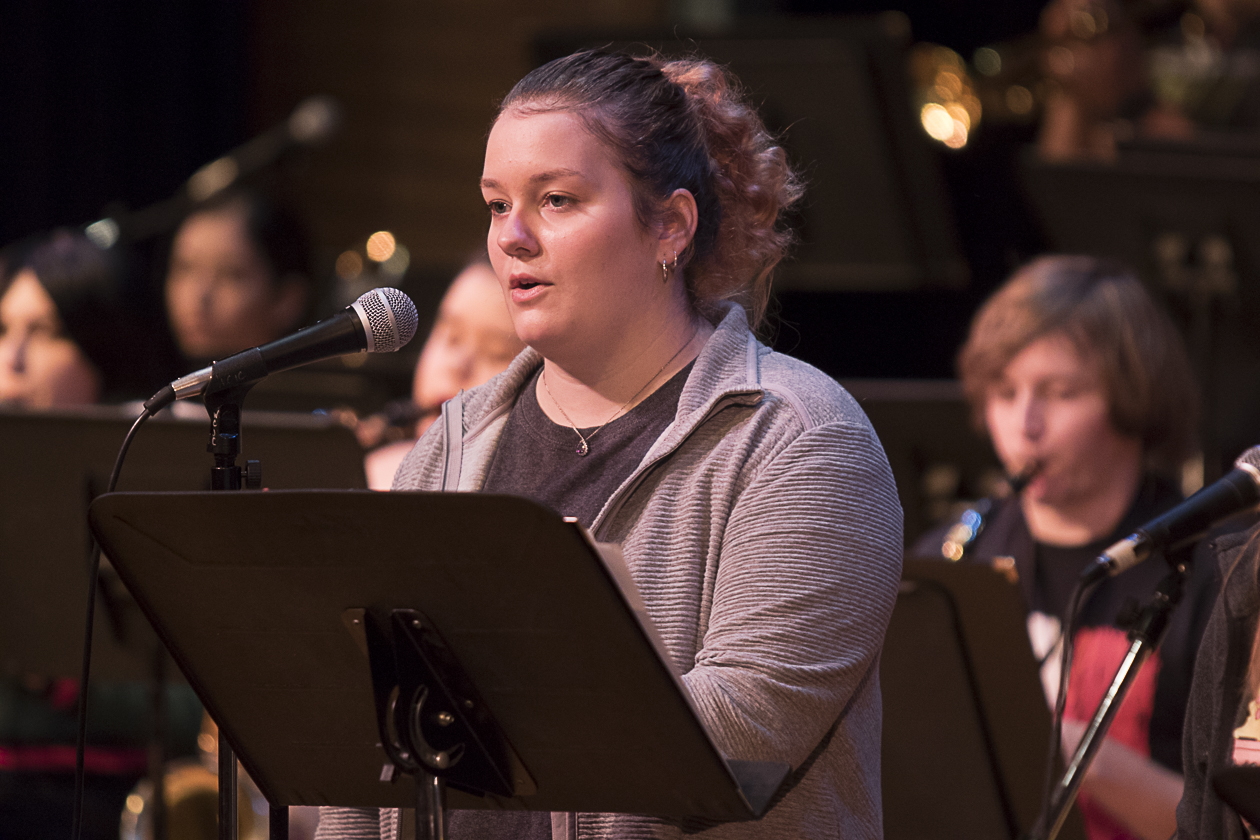 WCJC Choir member Brenna Hodges of Bay City practices her vocal part while the WCJC Band provides the music. Both the band and the choir will perform together at the "Big Band" concert, scheduled for 7 p.m. Tuesday, Nov. 12, at the Horton Foote Theatre in the Duson-Hansen Fine Arts Building on the Wharton campus. The event is open to the public and admission is free.

WHARTON, TEXAS – Wharton County Junior College’s Band and Choir will join forces for a concert that is sure to have audience members dancing in their seats.

Scheduled for 7 p.m. Tuesday, Nov. 12, at the Horton Foote Theatre in the Duson-Hansen Fine Arts Building on the Wharton campus, the “Big Band” concert will feature songs from the 40s and 50s. The show is open to the public and admission is free.

Notable selections include “Moonlight Serenade” by Glenn Miller, “Satin Doll” by Duke Ellington and Billy Strayhorn and “Blues in the Night” by Ella Fitzgerald.  WCJC Band Director Joe Waldrop and WCJC Choir Director Karl Paoletti decided to team up on the performance and highlight the vocal and musical talents of their students simultaneously. Waldrop said it was critical for both groups to follow cues in order to stay in sync.

“The harmonies are so tight in the vocal arrangement and the precision between groups just has to be spot on,” Waldrop said.

Paoletti said the experience has been a rewarding one for the choir.

“The repertoire is challenging to perform because of the lively rhythms and complex jazz harmonies,” Paoletti said. “This has been a great educational experience for the students.”

Two guest performers will add further dimension to the performance on trumpet and trombone. Waldrop noted that this particular genre of music is a personal favorite.

“I really enjoy this style of music,” he said. “It can be fast and furious, sweet or hectic, but no matter what it always puts me in a happy state of mind.”

Paoletti encouraged the public to come out and enjoy what is sure to be an exciting performance.

“This is a high energy concert that will keep you tapping your toes, clapping your hands and dancing in your seat,” he said.