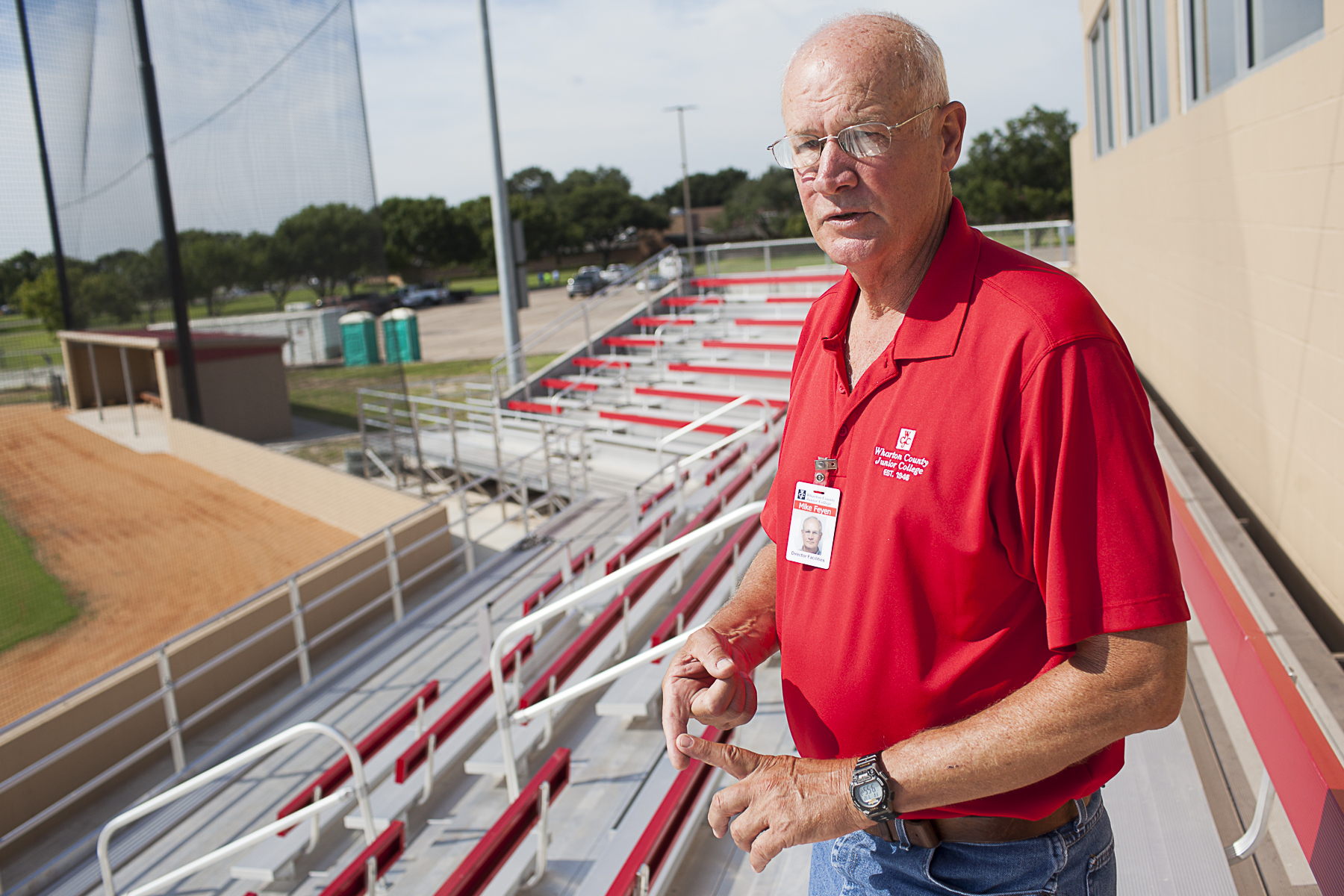 WCJC’s Director of Facilities Management Mike Feyen looks over the newly constructed Corbett Park, one of several projects completed this past year in an ongoing effort to provide students with the most up to date resources and facilities.

WHARTON, TEXAS – From completing new building additions to achieving accreditation, it has been a busy and successful year for Wharton County Junior College. College officials believe such achievements are the key to providing students the resources needed to reach academic goals.

“We take our role in the community very seriously and are continually looking for ways to improve what we do and how we do it,” said WCJC President Betty McCrohan. “We want our students to be able to achieve their goals in the most efficient and beneficial way possible.”

In February, the college celebrated the completion of a major project at the Johnson Health Occupations Center. The $6.5 million project included the construction of an 18,000 square foot addition and the renovation of the existing 34,000 square foot structure. The facility, located at the north end of the Wharton campus, houses the bulk of the college’s Allied Health programs, including Associate Degree Nursing, Dental Hygiene, Health Information Technology, Human Services, Physical Therapist Assistant, Radiologic Technology, Vocational Nursing and Pre-baccalaureate Nursing. The college’s Emergency Medical Services program was also relocated to the newly refurbished facility.

The project was made possible through Johnson Foundation and Gulf Coast Medical Foundation funding.

In April, WCJC officially dedicated the Gene Bahnsen Gymnasium, located on the Wharton campus. The gym was named in honor of longtime Athletic Director and Coach Gene Bahnsen, who came to the college in 1959 and spent 60 years coaching everything from track and field to football and tennis. Bahnsen was named athletic director in 1965 and has held that post ever since.

“Coach Bahnsen has been here for all of us over his 60-year career. He has coached some excellent teams,” McCrohan said. “We wish him well in his retirement.”

In June, the college received notification from the Southern Association of Colleges and Schools’ Commission on Colleges (SACSCOC) that WCJC has been reaccredited. This is an important milestone as it ensures the college is compliant with high-level standards and that the degrees and course credits awarded by the college are viable and worthy of transfer to institutions of higher learning.

The accreditation process must be completed every 10 years and requires intensive information gathering on the part of college administration and staff.

“This is a significant accomplishment for the institution and underscores what we already know – that WCJC is an exceptional institution comprised of dedicated faculty and staff who are steadfast in their pursuit of student success,” said Dr. Amanda Allen, WCJC’s vice-president of planning and institutional effectiveness and SACSCOC liaison.

This past year, the college also began construction on a new baseball park on the northeast side of the Wharton campus. Thanks to a generous donation from Houston resident Duncan Corbett, the $1.5 million ballpark – deemed Corbett Park – is nearly complete. The ballpark features batting cages, dugouts, a beautiful field with underground irrigation, batting cages, a scoreboard, an air-conditioned press box complete with a conference room and seating for 440 spectators.

WCJC Baseball Coach Keith Case said the field will be a “game changer” for the Pioneers.

“It’s a very positive improvement for the baseball program as well as our college and the fans from the surrounding area,” Case said.

Corbett Park is expected to be completed sometime this summer, with scrimmages planned for Fall 2019.

The college is also in the process of implementing a host of security upgrades as part of a massive, system-wide effort to improve safety at its Wharton, Richmond and Bay City campuses. So far, a new access card system has been implemented, video surveillance cameras have been installed, and an intercom system has been set-up in the Presidential Suite on the Wharton campus.

Currently under way are the installation of digital monitors for emergency notifications as well as emergency phones and a Public Address system. Total cost is more than $1.3 million.

Wharton County Junior College is a Texas public, two-year, comprehensive community college offering a wide range of postsecondary educational programs and services including associate degrees, certificates, continuing education courses, cultural affairs and leisure-time activities for the benefit of the community and a population of students that varies in age, background and ability. WCJC operates campuses in Wharton, Sugar Land, Richmond and Bay City with a student population of more than 7,000.