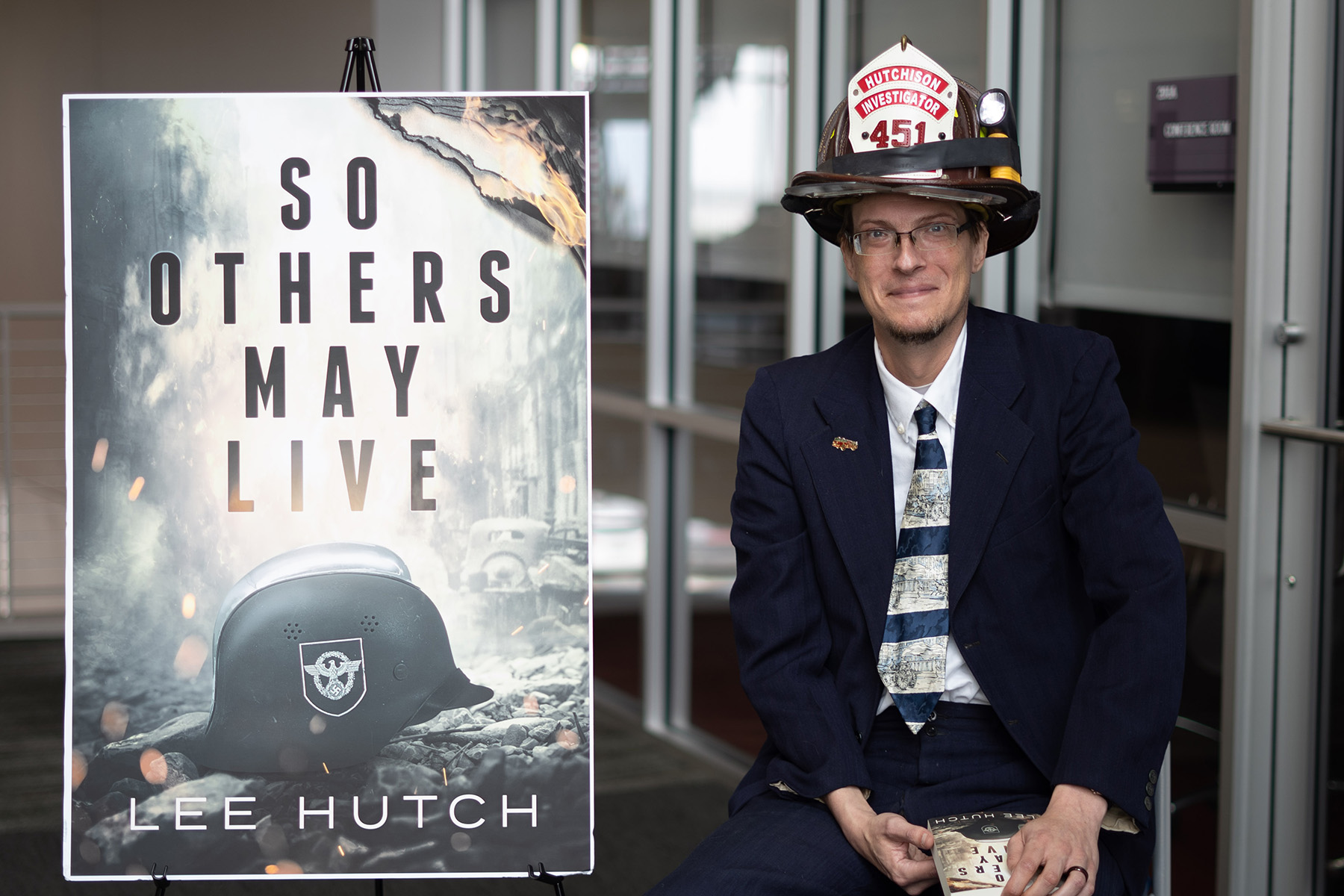 Wharton County Junior College Instructor of History Brady Lee Hutchison poses with an image of his first novel, "So Others May Live." Written under the pen name of Lee Hutch, the novel parallels the lives of an Allied bomber and a German firefighter during the Second World War. Hutchison leaned on his own experiences as a firefighter and arson investigator while writing the book.

WHARTON, TEXAS – Wharton County Junior College history instructor Brady Lee Hutchison had three goals when he was a youngster growing up in Port Arthur: become a firefighter, obtain a history degree and write a book.

The first two objectives were met earlier in life, with Hutchison spending a decade as a firefighter and arson investigator and simultaneously obtaining a master’s degree in history. He has taught history at WCJC since 2013, first in a part-time capacity and now as a full-time instructor.

Hutchison’s third goal of writing a book was accomplished this past year with the publication of his first novel, “So Others May Live,” published under the pen name of Lee Hutch. Set in World War II, the book covers a topic Hutchison knows only too well – firefighting.

“My academic interest, as a historian, concerns the challenges faced by fire departments in coping with wartime conditions,” Hutchison explains. “What eventually became a novel actually started as research I conducted while getting my master’s degree. As time passed, I realized a more effective way to tell the story would be through fiction.”

“So Others May Live” presents a unique viewpoint of the Second World War as it follows the lives of both a British bomber pilot as well as a German firefighter. The firefighter is tasked with keeping Berlin from burning to the ground during the nightly Allied bombing raids.

As stated in the book’s synopsis, “this is the story of those who give their lives so others may live.”

Hutchison’s love of writing developed at a young age, primarily from an interest in reading. Now that he has his first novel under his belt, he plans on continuing to craft stories that blend historical events with fictional characters. His next novel is already under way and will focus on firefighting in New York City during the Civil War.

“So Others May Live” is available in paperback, e-book and hardcover from Amazon and other online retailers.