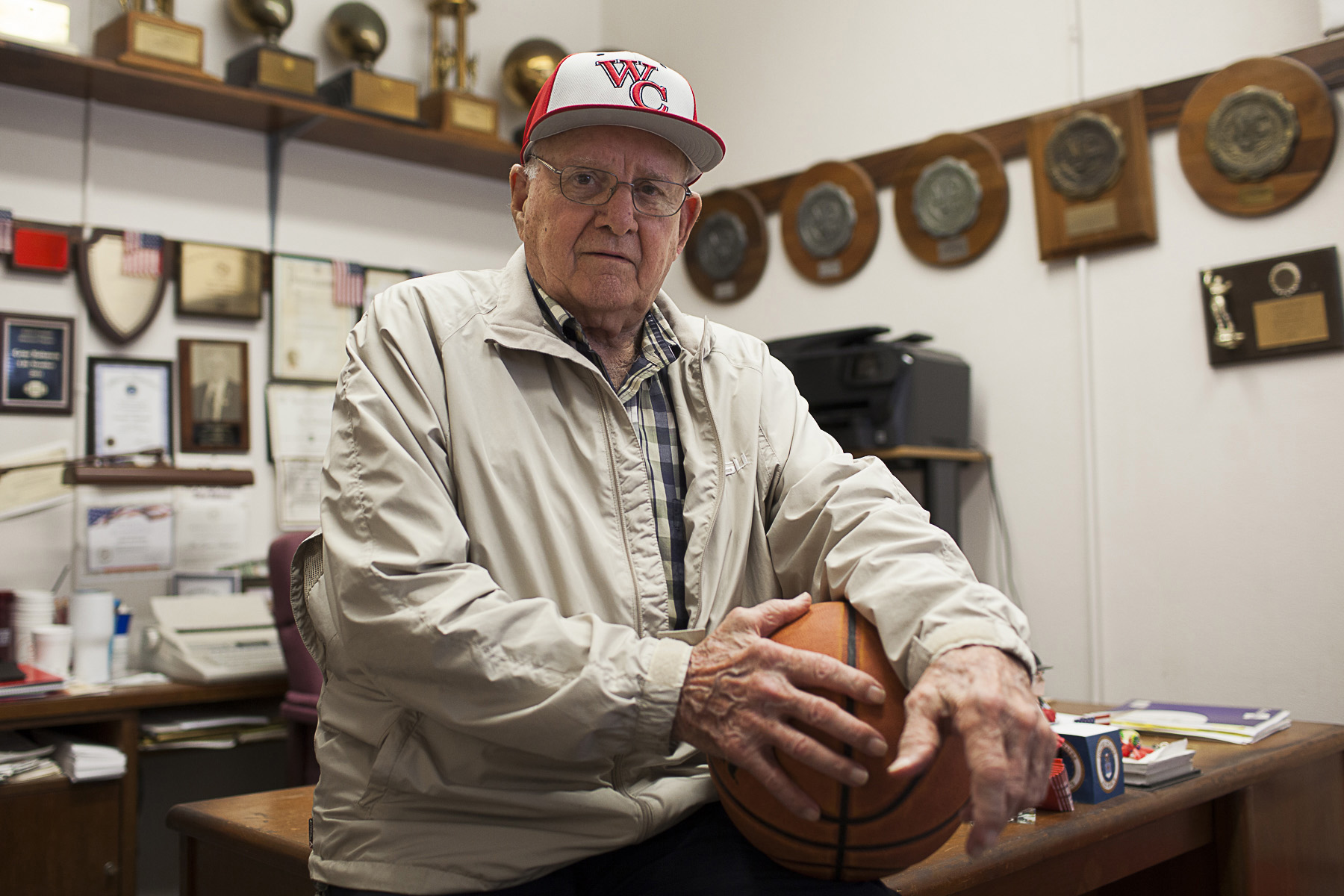 Wharton County Junior College will name its gymnasium after Coach Gene Bahnsen in recognition of his 60 years of service to the college. Bahnsen was hired in 1959 as head basketball coach, assistant football coach, physical education instructor and athletic dorm supervisor.

WHARTON, TEXAS – Wharton County Junior College’s gymnasium will soon be named in honor of Coach Gene Bahnsen for his 60 years of service to the college.

Bahnsen, 85, will be recognized during a naming ceremony scheduled for 2 p.m. Wednesday, April 17, at the gymnasium facility, located on WCJC’s Wharton campus. Guests, family members, longtime co-workers and former players who were coached by Bahnsen are all expected to be on hand for the special event. The event is open to the public and an RSVP is recommended. Contact the Office of Marketing and Communications at 979-532-6322 or via email at cherylm@wcjc.edu

WCJC President Betty McCrohan said Bahnsen’s career is a cause for celebration.

“To recognize Gene for his six decades of service to the college, including far-reaching publicity that he garnered for the institution with award-winning athletic programs, and for having a positive influence on the lives of thousands of students, it is the pleasure of the college’s administration and board of trustees to name the Wharton campus gymnasium in his honor as a token of our appreciation for his devotion to the college,” McCrohan said.

“It’s been a good run,” he said. “I had lots of other offers over the years but always felt I needed to stay here. I don’t regret that one bit.”

A native of Vinton, La., Bahnsen was a well-rounded athlete who played football for four years while obtaining his bachelor’s degree in physical education from North Texas State University in 1955. He lettered all four years, earning All-Texas honors in 1953. After earning his master’s degree in health, physical education and recreation from North Texas State in 1956, Bahnsen was commissioned through the ROTC into the U.S. Air Force and shipped out to Germany. During his three year stint in the service as a lieutenant, he worked in security while playing and coaching football, basketball and track in the USAFE Germany Conference.

Bahnsen had married shortly before being shipped out and his wife, Jan Vacek, an El Campo native, made the trek to Europe via an arduous, nearly two-week trip aboard a passenger ship filled with other military wives and a host of seasick children. While in Germany, the couple would be blessed with their first child, Bonnie.

Upon his discharge from the Air Force, Bahnsen worked briefly as a car salesman in Crane, Texas, while searching for a coaching position. Soon thereafter, he was offered a job at WCJC and was hired on July 1, 1959, to be the college’s basketball coach, assistant football coach and physical education instructor. He also coached track and field in the off season.

“At one time, we had the most diverse junior college athletic program in the United States,” Bahnsen said.

His duties also included being appointed the athletic dorm supervisor, a position that led to Bahnsen and his family moving into a small suite in the dormitory upon their arrival at WCJC. Bahnsen recalls those days as exciting and memorable yet challenging, with the dorm (only the lobby had air-conditioning) less than ideal for his growing family. The Bahnsens would eventually have three more children – David, Nancy and Billy – and relocate off-campus.

In 1965, Bahnsen was promoted to head football coach and athletic director, along with his ongoing duties of coaching the basketball team. Five years later, he would move on from the football program and focus entirely on basketball and overseeing the college’s athletic programs. He would continue as WCJC’s athletic director for the next six decades.

During his tenure as basketball coach, Bahnsen guided the Pioneers to various state championships and national playoff berths. He further served as the Football Commissioner of the Southwest Junior College Football Conference and spent many years officiating at the high school and senior college levels. He holds an honorary lifetime membership in the Texas Association of Sports Officials and for six decades has been a member of the Texas High School Coaches’ Association.

In 2012, he was inducted into the National Junior College Athletic Association’s Men’s Basketball Coaches Association Hall of Fame.