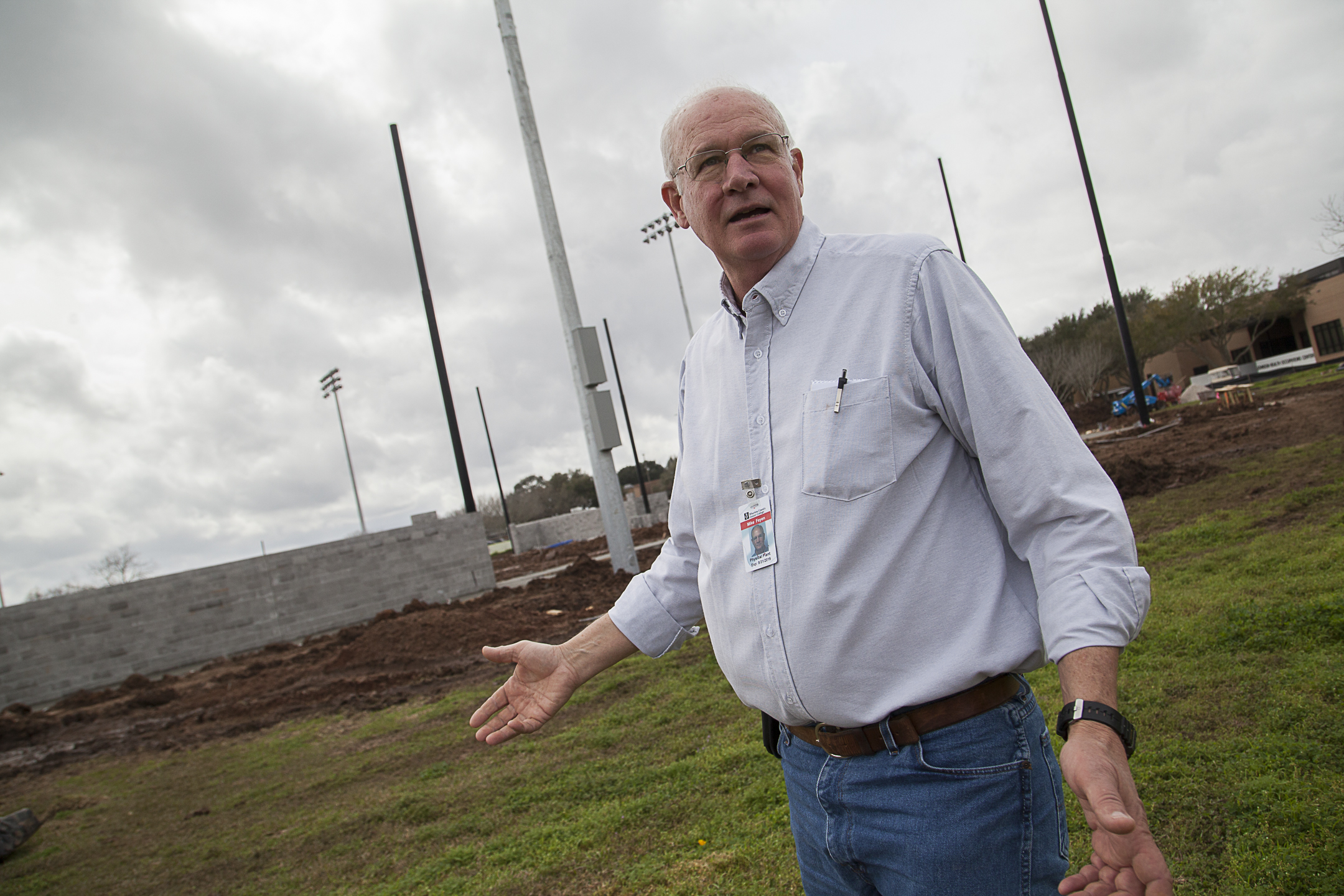 Mike Feyen, WCJC’s Director of Facilities Management, looks over the new baseball park currently under construction on the northeast side of the college’s Wharton Campus.

WHARTON, TEXAS – It’s out with the old, in with the new for the Wharton County Junior College Pioneers Baseball Team.

Thanks to a generous donation from Houston resident Duncan Corbett, also a local land owner, the Pioneers will soon have a brand new ballpark in which to compete. The $1.5 million project, which kicked off several weeks ago, includes a new field, an underground irrigation system, dugouts, lighting, an air-conditioned press box, a batting cage, a scoreboard, and bleachers for more than 440 spectators.

WCJC Baseball Coach Keith Case said the project is a dream-come-true for his team.

“Without question, I’m excited,” Case said. “It’s a very positive improvement for the baseball program as well as our college and the fans from the surrounding area. It’s going to be a game changer for us.”

The college currently shares a ballpark with Wharton High School. Located off Boling Highway, just south of WCJC’s Wharton campus, the ballpark has served its purpose but has posed some challenges in light of scheduling, facilities and general maintenance.

The new ballpark – which will be deemed Corbett Park – is being built at the far northeast corner of the Wharton campus and will be for the sole utilization of the college.

Case sees immediate benefits to the college having its own facility.

“Scheduling will no longer be an issue. And from a recruitment standpoint, we will be far more attractive to up and coming players,” he said. “This will make us a lot better instantly.”

The Pioneers won’t have to wait very long to get in some playing time on the new field. Tentative plans were to have the project complete by the end of February or first of March. But recent rainfall will undoubtedly delay that schedule.

“Depending on the weather, the project will most likely be completed by mid to late March,” said WCJC Director of Facilities Mike Feyen.

Feyen added that the college is also planning to renovate an existing restroom facility adjacent to the ballpark. Built in 1996, the facility is insufficient for accommodating the ballpark’s 400-plus fans.

Case thanked Corbett and college officials for making the project a reality.

“We are very appreciative to Mr. Corbett, WCJC President Betty McCrohan, the WCJC Board of Trustees and the college’s staff for stepping up to the plate and hitting a grand slam,” he said. “This ballpark will serve as a legacy for the Corbett family and will live on for generations to come.”