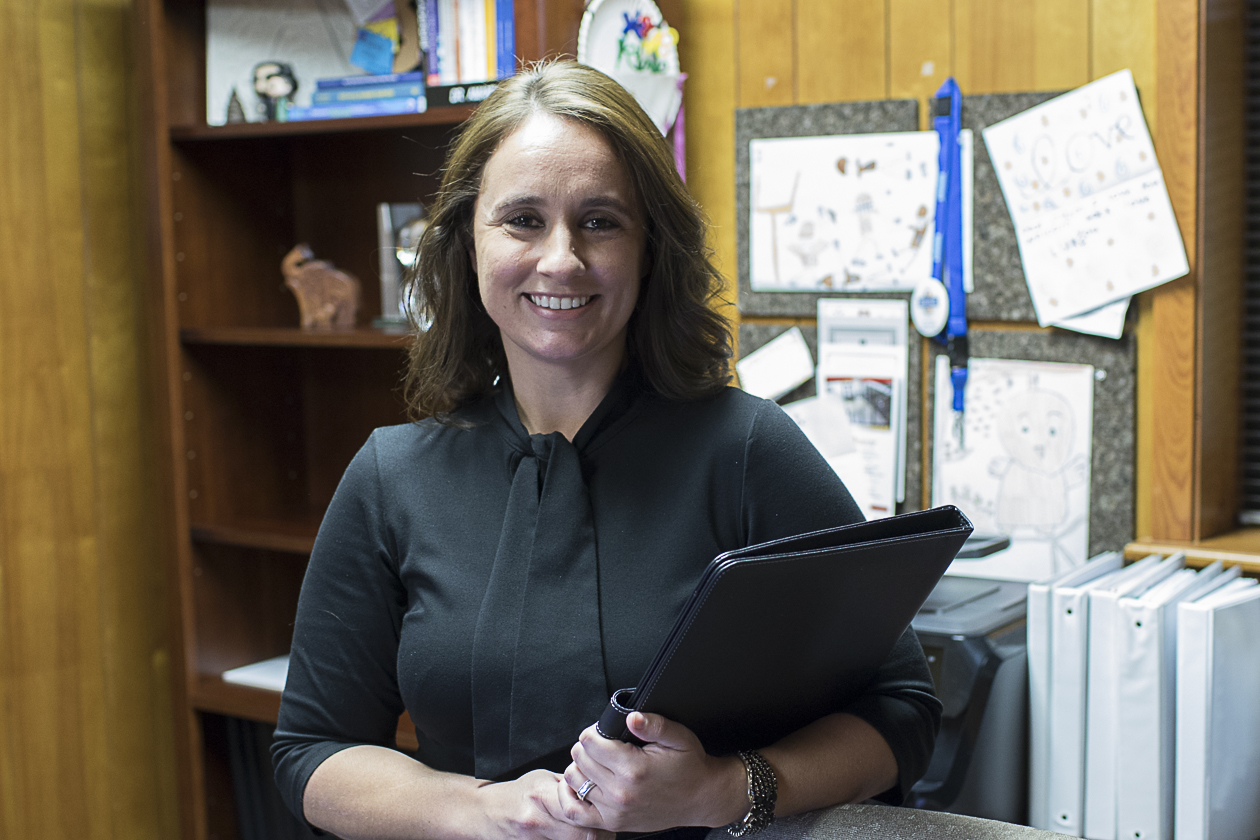 Since arriving at WCJC in March of 2018, Dr. Amanda Allen has had her hands full as Vice President of Planning and Institutional Effectiveness. Allen’s responsibilities include ensuring the college is compliant with the Southern Association of Colleges and Schools Commission on Colleges (SACSCOC).

WHARTON, TEXAS – From ensuring Wharton County Junior College is compliant with state standards to managing the development of the college’s strategic plan, Dr. Amanda Allen shoulders a crucial load in her role as the college’s Vice President of Planning and Institutional Effectiveness.

While others might cringe at the prospect of such a burden, the 34-year-old Bryan native remains enthusiastic and passionate about her responsibilities. Education, after all, is something near and dear to her heart.

“My motivation comes from understanding the significant impact that education has on the lives of those we serve,” Allen said. “Educational attainment influences not only the lives of our students, but those of their families and the community as a whole.”

Allen arrived at WCJC on March 1, 2018, coming from the University of Texas Health Science Center in San Antonio where she headed up the School of Medicine’s programmatic assessment, compliance and accreditation. Before that, she spent seven years at the Texas A&M Health Science Center, focusing on program development and institutional assessment. Her career in education actually began in the classroom as a high school chemistry and physics teacher.

“Upon entering college, I wasn’t entirely sure what career path I wanted to pursue,” she said. “I knew that I had a strong affinity for all things science and math.”

Bringing her expertise to a community college like WCJC was a logical move for Allen.

“Community colleges, particularly those in rural areas, are on the front lines for ensuring that students have access to post-secondary programs that are marketable and transferable,” Allen said. “This impact is one which cannot be overstated and of which I am fortunate to be a part.”

In her role at WCJC, Allen serves as liaison for the Southern Association of Colleges and Schools Commission on Colleges (SACSCOC), a regional group that oversees accreditation for institutions like WCJC. Allen’s highest goal has been to guide WCJC through the accreditation process so the college can obtain reaffirmation, a process that must be undertaken every 10 years.

Prior to her arrival, the college submitted its Compliance Certification to SACSCOC and in May of 2018 received feedback requesting additional documentation on nine standards. For the first several months on the job, Allen joined other college employees with compiling the information needed to meet these requests. That information was part of a Focused Report that was submitted to SACSCOC in August of 2018. A special on-site team is on schedule to visit the college in October as part of the review process.

In addition to the report, WCJC further submitted its new Quality Enhancement Plan (QEP) to the on-site team. The QEP seeks to improve student retention and completion rates by implementing technological resources and additional counseling and support.

“This is an exciting time and I am looking forward to the team engaging with the exceptional students, faculty and staff that are the heart of WCJC,” Allen said.

Allen has been most impressed by her co-workers at WCJC and looks forward to working alongside them in the future. She is also excited about becoming a member of the local community, along with her husband, Scott, and their 8-year-old son, Luke.

“Coming into a new role at a new school, I know that I have so much to learn,” she said. “By working with and being open to the ideas and expertise of others, I hope to better understand how I can help support the future growth and development of the institution as a whole. I am so grateful to be working at WCJC.”