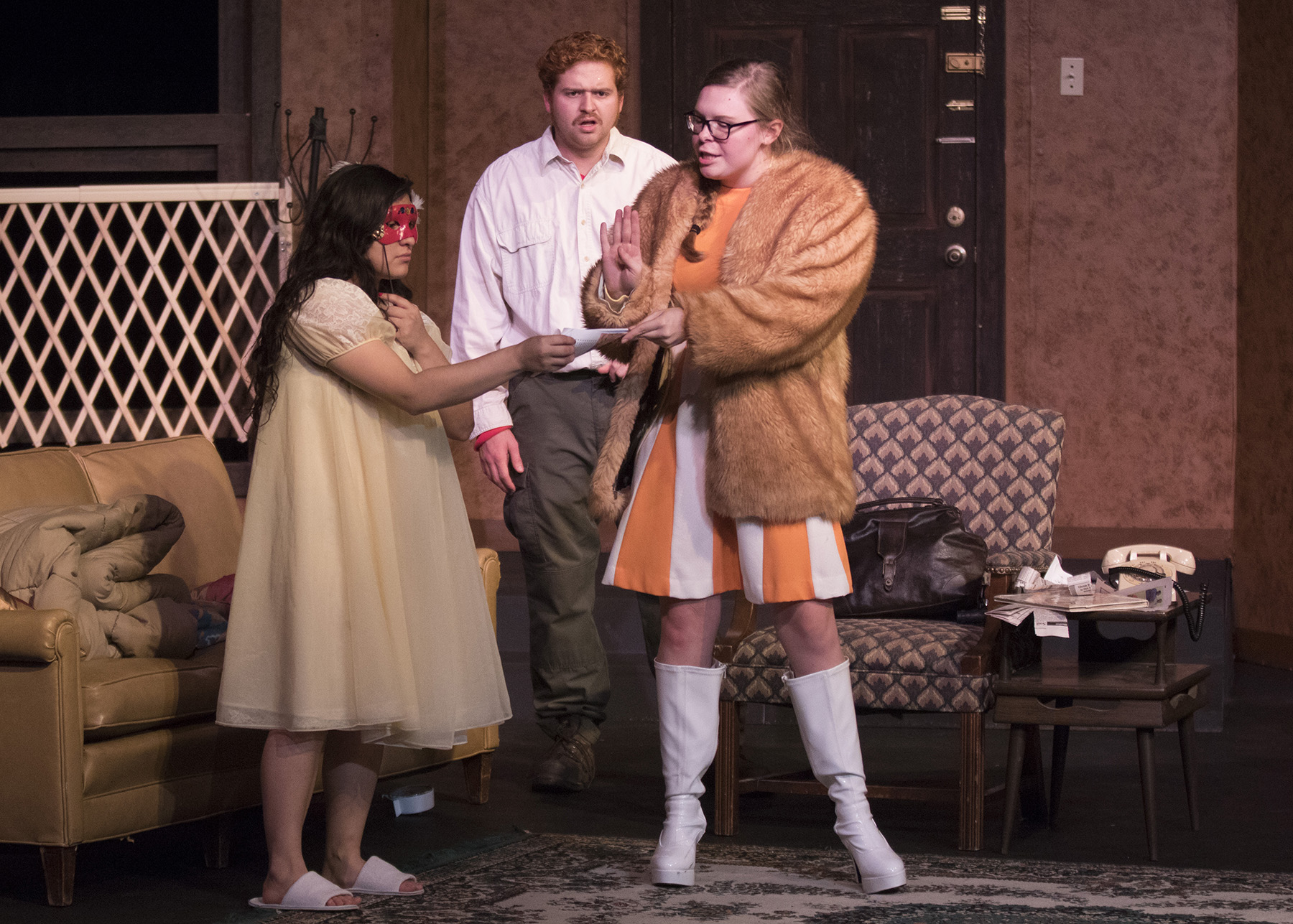 Wharton County Junior College Drama students rehearse a scene from The House of Blue Leaves, which opens on Nov. 8 at the Horton Foote Theatre on the Wharton campus. From left are Alexis Flores of El Campo, Trace Morris of Needville and Makayla Biskup of El Campo.

Scheduled for 7 p.m. Nov. 8-10 at the Horton Foote Theatre in the Duson-Hansen Fine Arts Building on the Wharton campus, The House of Blue Leaves is open to the public and admission is free. The play is set in New York City in 1965, during the visit of Pope Paul VI, and focuses on Artie Shaughnessy, a zookeeper who moonlights as a songwriter and hopes to break into writing movie themes.

WCJC Instructor of Drama Greg McLarty said the play is characterized as a “dark” comedy as it pokes fun of subject matter that at one time may have been viewed as off-limits. The show is recommended for mature audiences.

“There’s a lot of really crazy stuff going on and it’s probably a little mature for younger viewers,” McLarty noted.

Tackling the primary role of Artie is WCJC sophomore Trace Morris of Needville. Morris brings life to the downtrodden character, who not only seeks to achieve his dreams of songwriting but also finds himself in the middle of a love triangle framed by girlfriend Bunny Flingus, a well-traveled woman of the world, and his wife, Bananas Shaughnessy, a struggling schizophrenic.

WCJC students Makayla Biskup and Alexis Flores, both of El Campo, do a marvelous job of portraying Bunny and Bananas, respectively, bringing energy and realistic portrayals to the complex characters.

In addition to the usual dialogue between characters, The House of Blue Leaves features several instances of the actors speaking directly to the audience, which in acting circles is referred to as “breaking the fourth wall.”

The production includes a stunning set furnished as an apartment, with a refrigerator, stove, cabinets, real furniture and even a working window and door. Edible food is also a large part of the show. Keeping track of all of that is a chore in and of itself.

“There’s almost three pages of props,” said Wharton student Tyler Korff, who serves as the stage manager. “We’ve got to keep track of a full kitchen.”