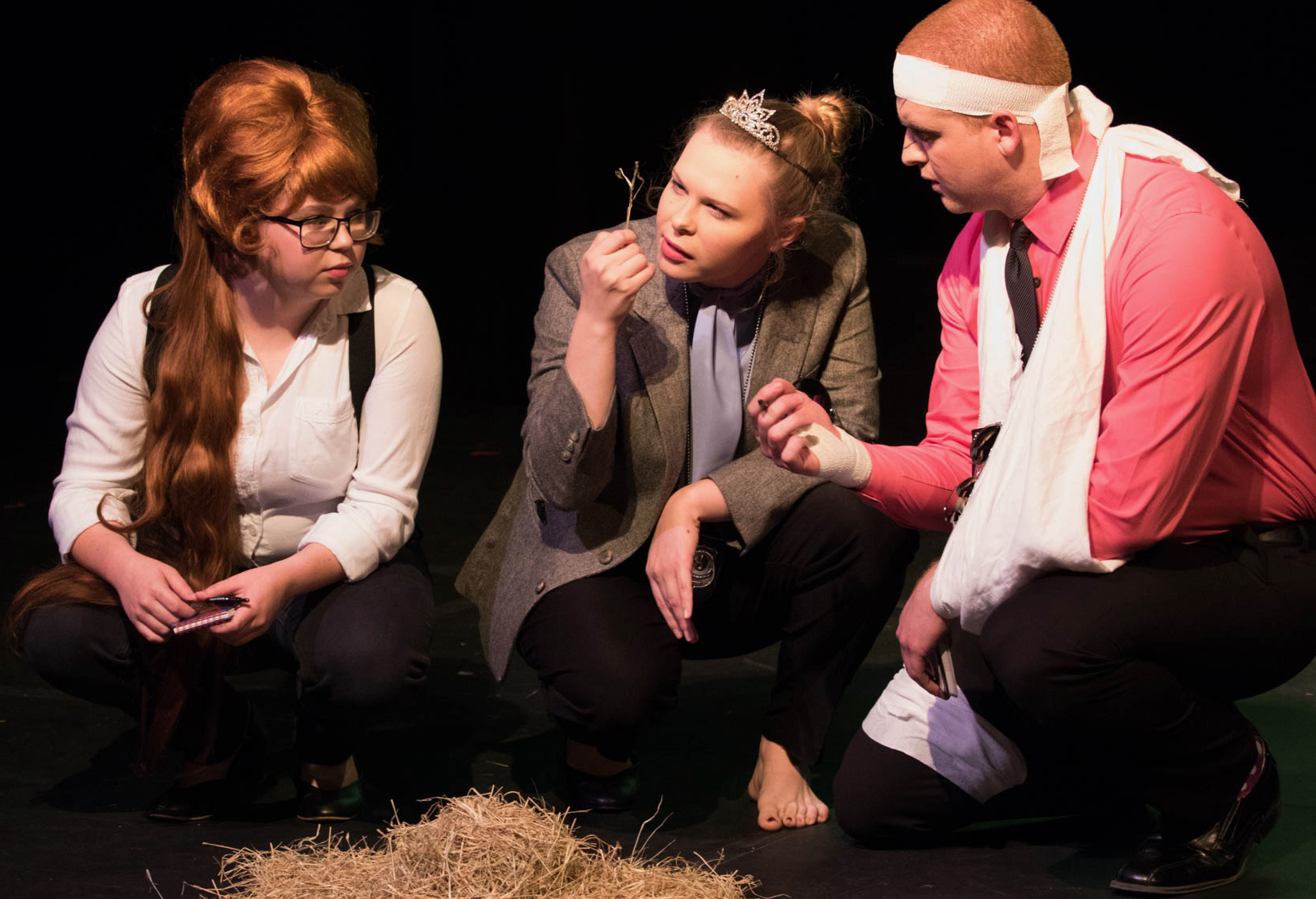 Wharton County Junior College students rehearse for the upcoming production, “Law & Order: Fairy Tale Unit,” which is scheduled for 7 p.m. Friday, April 27 in the Horton Foote Theatre on the Wharton campus. From left are Kaylin Meek of Hungerford, Makayla Biskup of El Campo and Trace Morris of Needville.

Scheduled for 7 p.m. Friday, April 27, through Saturday, April 28 at the Horton Foote Theatre in the Duson-Hansen Fine Arts Building on the Wharton campus, the play is filled to the brim with comedic scenarios, unusual interpretations of classic characters and a mysterious plot that will keep the audience guessing. Geared towards youngsters, the play is a perfect fit for elementary age students. Area elementary schools have been invited to a special matinee performance on Thursday, April 26. The shows are free of admission and open to the public.

“This production is a nice way to end the year,” said WCJC Drama Instructor Jami Hughes. “The play is light and silly and geared toward a younger audience.”

Written by Jonathan Rand, the play follows the classic outline of the long-running Law & Order TV show, with investigators and prosecutors teaming up to solve a crime. This time around, however, the protagonists are played by classic fairytale characters, with the investigators being Humpty Dumpty and Cinderella, while the lead investigator is Rumpelstiltskin (played this time as a female character).

The case itself surrounds the mysterious destruction of the homes belonging to “The Three Little Pigs.”

What ensues is a hilarious blend of classic fables and modern-day criminal procedure, with many of the WCJC students tackling several roles – some of which require a flip-flop of traditional gender. Little Bo Peep, for instance, just happens to have a fair amount of facial hair to match his frilly skirt.

“The role reversals are challenging and fun simultaneously,” Hughes said.

WCJC student Jackson Rogers of Richmond likes to meet such challenges head on. Well-known for his vocal projection and energy, Rogers said he decided to fall back on his natural abilities when creating unique voices for his characters.

“I ended up being loud and obnoxious like usual,” he said with a smile. “This show is a lot of fun.”