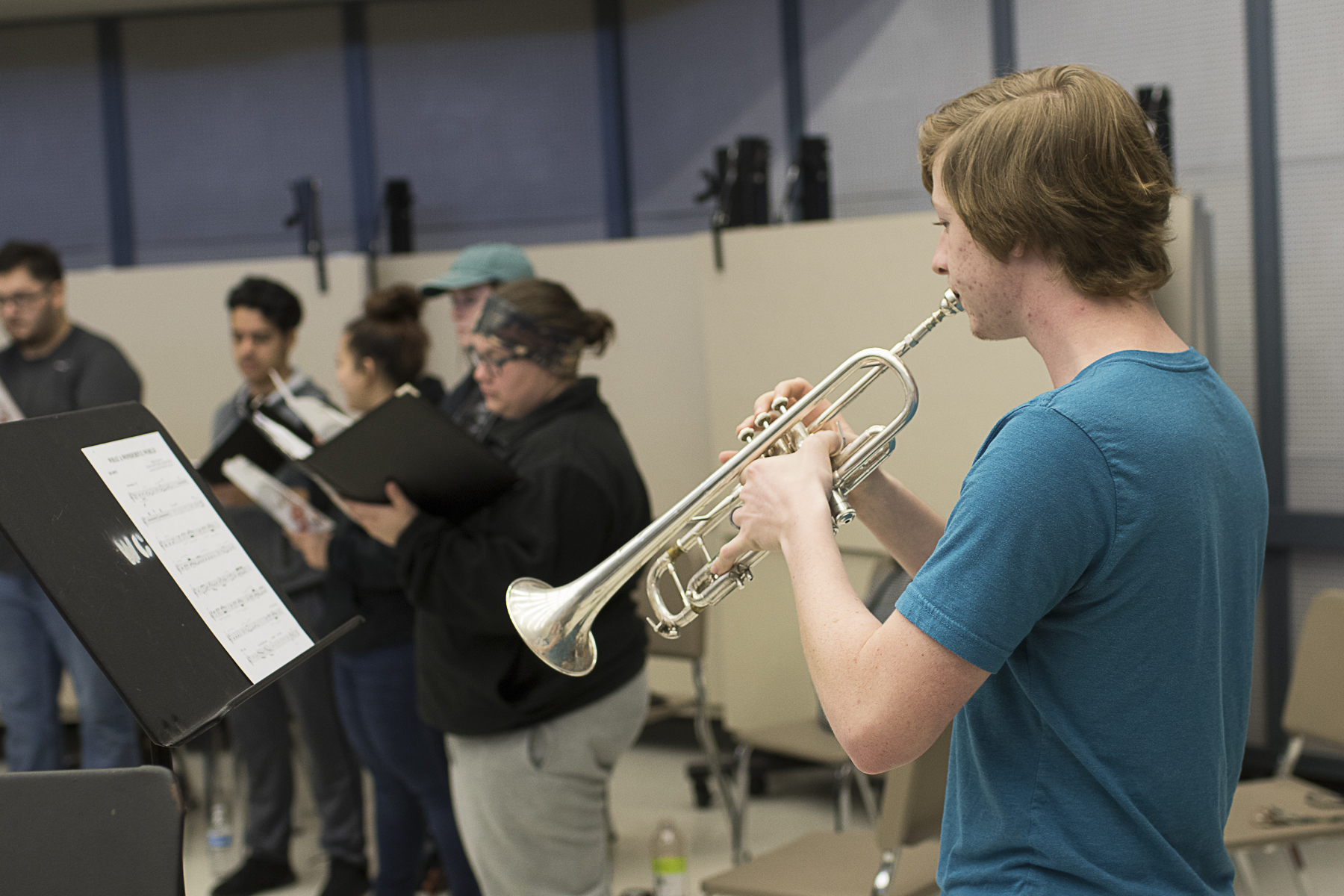 WCJC Band trumpet player Ethan Weinberg of Danevang rehearses with WCJC Choir members, left to right, Evan Stavena of Wharton, Alex Nieves of Richmond, Tori Moeller of Richmond, Natalie Self of Richmond and Ashley Albritton of Sweeny. The two groups are teaming up for "A Traditional Christmas" concert, which is scheduled for 7 p.m. Tuesday, Dec. 5 at the Horton Foote Theatre in the Duson-Hansen Fine Arts Building on the Wharton campus. The performance is open to the public and free of admission.

WHARTON, TEXAS – The Wharton County Junior College Music Department will celebrate the Christmas season with a combined concert featuring both the choir and the band.

Scheduled for 7 p.m. Tuesday, Dec. 5, at the Horton Foote Theatre in the Duson-Hansen Fine Arts Building on the Wharton campus, “A Traditional Christmas” will include performances from both the choir and the band individually as well as one song that’s done together. The concert is free of admission and open to the public.

“It is a great way to bring the ensembles together so the kids can experience working together in a collaborative fashion,” said WCJC Choir Director Dr. Kevin Klotz. “It is an educational experience for the students, and I think the audience will enjoy it, too.”

WCJC Band Director Joe Waldrop agreed, adding that the concert is a unique way to enjoy both lyrical pieces as well as instrumentals.

“This is a unique and entertaining opportunity for the audience and we hope the public will come out and join us as we start the Christmas season with the joy of music,” Waldrop said.

Setting up rehearsals has posed challenging for the respective groups.

“Finding time to practice together is tricky because our ensembles meet at different times,” Klotz said.

Klotz and Waldrop will share directorial duties during the concert. Selections will include many well-known Christmas favorites as well as some traditional carols.

“We hope the audience will join us on some of the songs,” Waldrop said.

As the final performance of the 2017 season, the concert is one that is not to be missed.

“I think the audience will really enjoy the fun and entertaining music that we will be presenting,” Klotz said. “With so much variety in the program, there is something for everyone.”