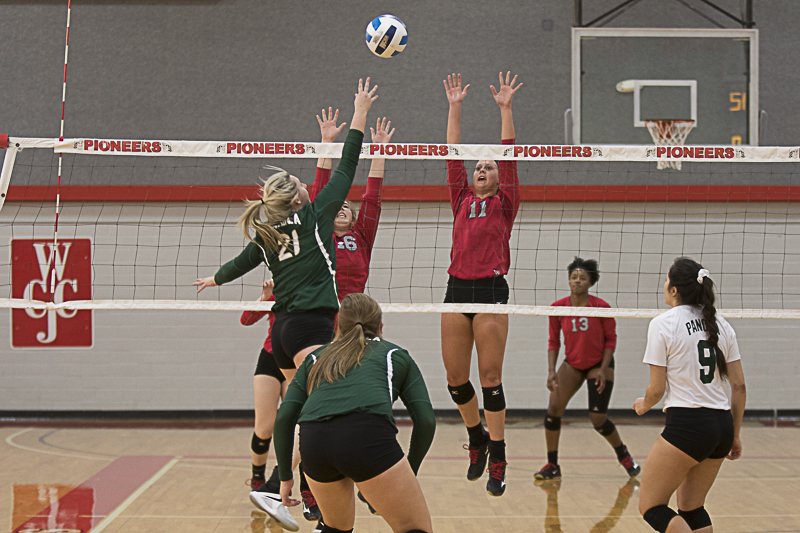 Wharton County Junior College outside hitter Sabrina Show (No. 11) of East Bernard leaps high to block a shot during one of the Pioneers' final games of the 2017 season. Assisting with the block is Avery Schroeder (No. 16) of Brenham and pictured in the background is Arianna McCarver (No. 13) of Austin.

WHARTON, TEXAS – The Wharton County Junior College Pioneers volleyball team did not have the kind of season Coach Brianna Florus was hoping for, but the leadership the players demonstrated while overcoming a host of challenges is a good sign for the future.

“I feel like we have a stronger foundation moving forward because of the hardships we have faced,” Florus said.

The team finished with an overall record of 8-17 and a conference record of 4-6. By comparison, last year’s team finished at 26-9 overall and 8-2 in conference. Florus lost several key players from the 2016 team to graduation and had to rely instead upon a talented – but inexperienced – corps of freshmen. Of the team’s 12 players, eight were newcomers.

“A big eye opener for me this season was seeing these freshmen having to go from being newcomers to becoming leaders almost overnight, all while earning a spot,” she said.

With a new squad to choose from, Florus had her hands full establishing the ideal lineup. Losing a few players along the way did not help matters.

“I felt we could not get everyone on the same page at the same time,” she said. “Lineups were changed regularly to try and find something that clicked, but we could never get that consistency that we needed to build momentum.”

Even so, the Pioneers fought valiantly against some very tough, experienced foes. Among the season’s high points were victories against Coastal Bend College, Laredo College and Lee College. Several players earned recognition for their efforts:

· Sabrina Show – freshman outside hitter from East Bernard and kill leader for the Pioneers. She received All-Tournament honors at a NCTC Tournament in September and made 1st Team All-Conference.

· Avery Schroeder – freshman setter from Brenham. She made 2nd Team All-Conference for the second highest assists per set.

“Each one of these student athletes showed great leadership potential not only on the court but also in the classroom and community,” Florus said.

Looking to next season, Florus believes the Pioneers are in good position to have the kind of success she has come to expect in her 11 seasons at WCJC.

“More than anything, we need to regroup and get everyone on the same page,” she said. “We have the talent, but it takes more than that. I believe in this program. I know we will find a way to get us back on track because we are Pioneers.”