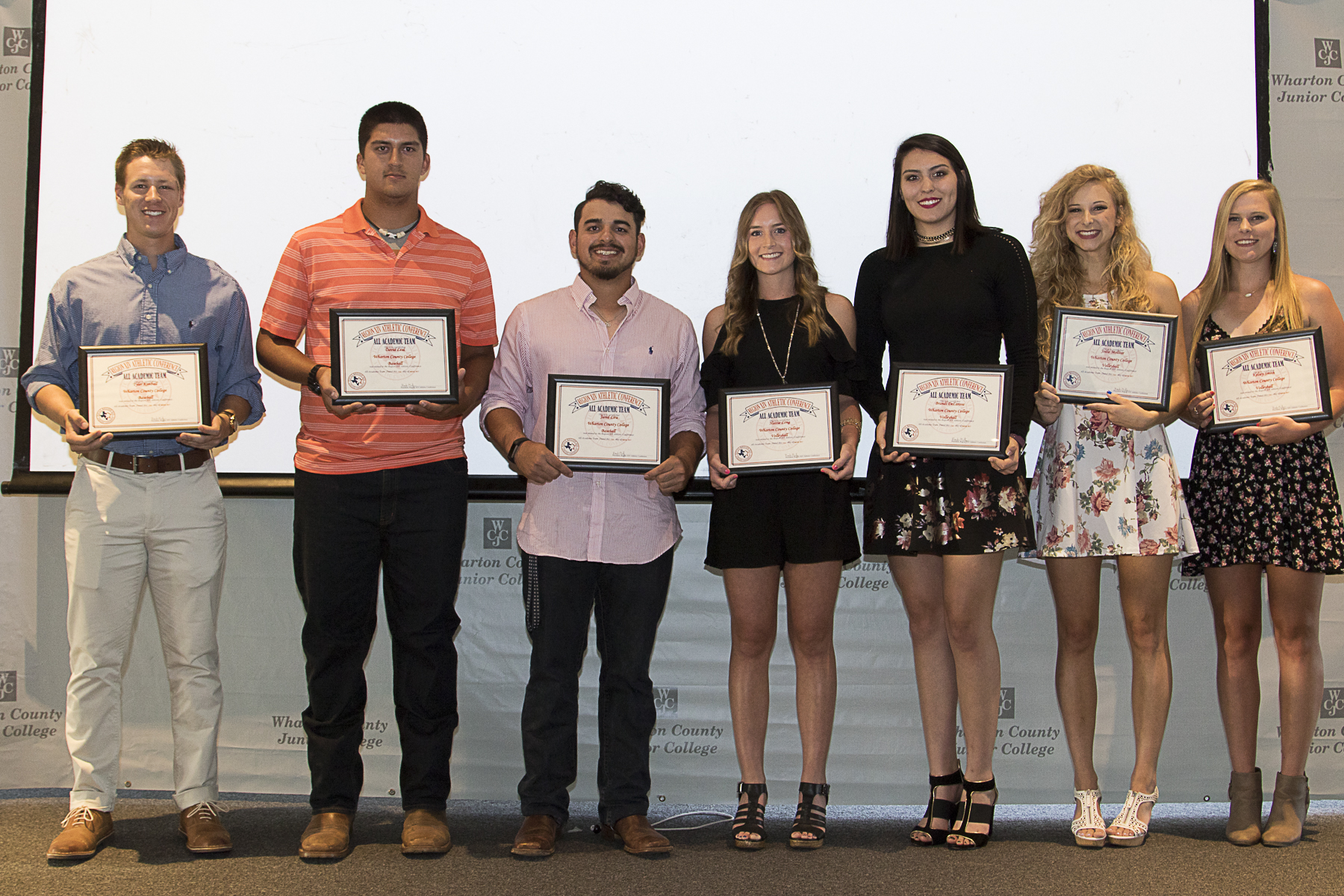 Wharton County Junior College student athletes were recognized for excellence both on and off the playing field at the 54th Annual Athletic Banquet, held recently on the Wharton campus. Pictured are athletes who earned Academic All-Conference Awards for maintaining at least a 3.25 GPA. From left are Tyler Kimball of Pearland, David Leal of Houston, Jared Lira of Corpus Christi, Hattie Lang of Tarkington, Brandi DeLaRosa of Lumberton, Jodie Molitor of Houston and Kelsey Smith of Cypress. 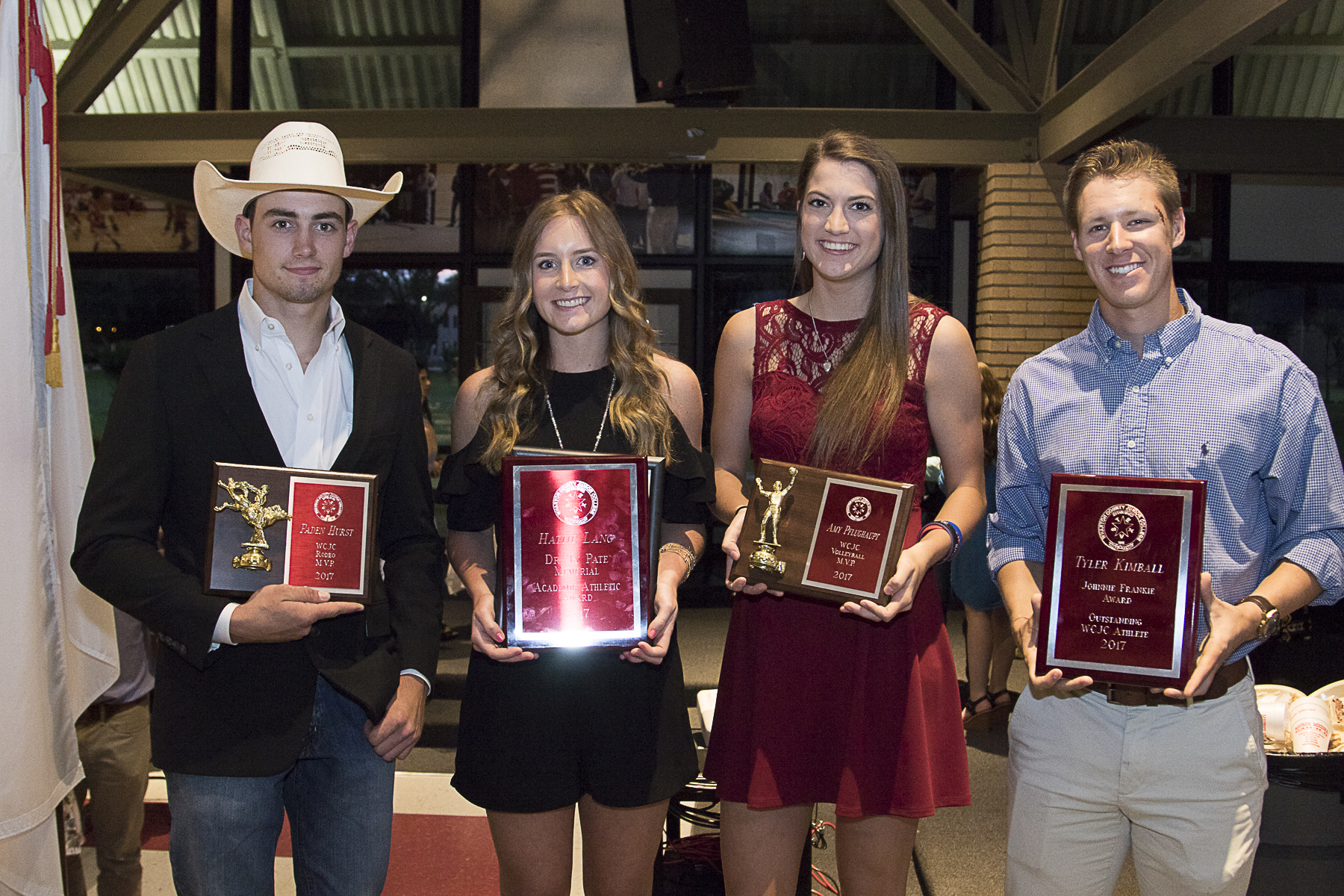 Special recognition was given to Wharton County Junior College athletes during the recent Athletic Banquet, held at the Wharton campus. From left are Paden Hurst of Navasota, the rodeo team’s Most Valuable Player; Hattie Lang of Tarkington, winner of the Dr. Ty Pate Academic Award; Amy Pflughaupt of El Campo, the volleyball team’s Most Valuable Player; and Tyler Kimball of Pearland, winner of the Johnnie Frankie Award. 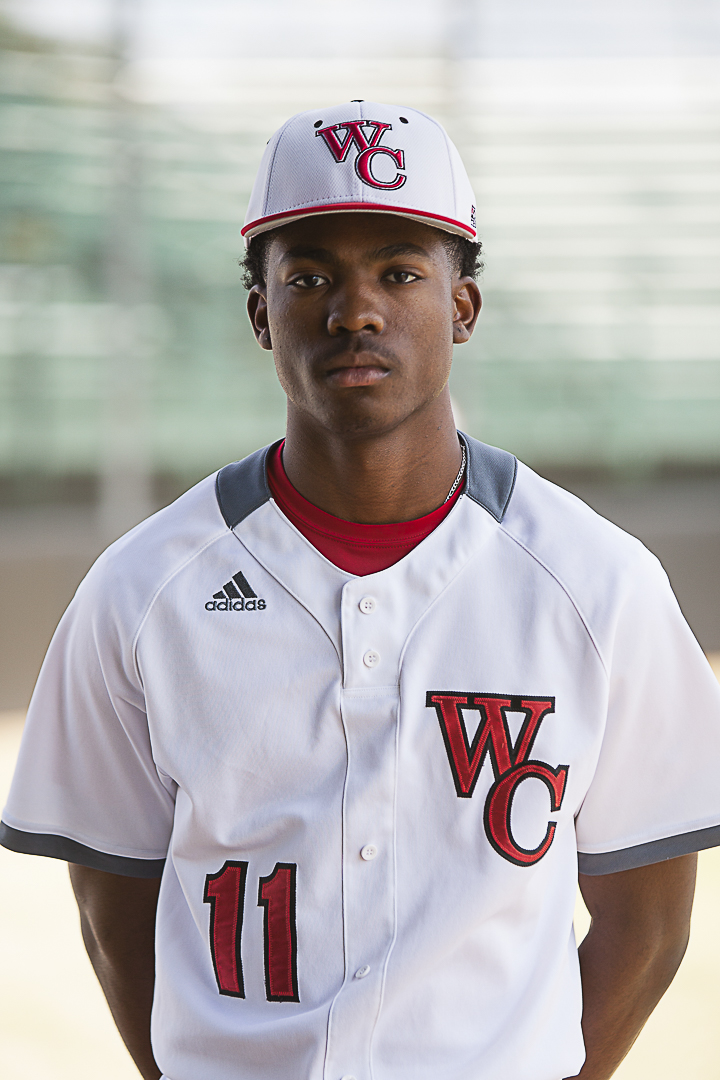 Wharton County Junior College outfielder Spencer Griffin of Richmond was chosen as the baseball team's Most Valuable Player for the 2017 season.

WHARTON, TEXAS – Wharton County Junior College’s student athletes received an official pat on the back for a job well done during the 53rd Annual Athletic Banquet, held recently at the Wharton campus.

Athletes from the college’s three sports programs – baseball, rodeo and volleyball – were introduced individually and lauded for their accomplishments both on and off the playing field. The students were reminded that their sporting careers, while important, would play second fiddle to their educational pursuits as time went by.

“All of this (athletic competition) is short lived in one way or another,” said WCJC Rodeo Coach Sean Amestoy. “We’re most proud of the education these students have received.”

“Athletics last a little while, but education is a lifelong thing,” Taylor said.

Winner of this year’s Dr. Ty Pate Academic Award was Hattie Lang, a volleyball player from Tarkington who maintained a 3.7 GPA and earned Academic All-Conference honors as well as making 2nd Team All-Conference.

Another special award – the Johnnie Frankie Award – was also presented during the banquet. Jenny Banker, daughter of the late WCJC coach Johnnie Frankie, was on hand to present the award, an honor bestowed since 1964 upon a single WCJC athlete who has exhibited outstanding abilities or character. This year’s winner was baseball player Tyler Kimball of Pearland.

A shortstop who saw plenty of action this season, Kimball maintained a 3.4 GPA despite an exhausting competition schedule that included overnight stays in Louisiana and south Texas. He attended the banquet with a swollen left eye and a row of stitches after being hit in the face by a fastball during a game held the previous night.

“We look forward to seeing what he will do for us in the fall,” Amestoy said.

Volleyball Coach Brianna Florus presented her MVP award to El Campo native Amy Pflughaupt, who distinguished herself this past season by leading the conference in kills and earning Newcomer of the Year honors. Pflughaupt comes from a rich athletic tradition. Her mother, Bonnie Beard Pflughaupt, played volleyball for the Pioneers in the mid-1980s, capturing the Johnnie Frankie Award in 1984 before embarking on a stellar career at Sam Houston State University.

Florus noted that Amy Pflughaupt was an exceptional player who possessed an abundance of team spirit.

“Never once did she take sole credit for her achievements,” Florus said.

Academic All-Conference awards were also presented to seven student athletes who maintained at least a 3.25 GPA, had been enrolled at WCJC for at least three semesters and had taken at least 36 hours of course work.

The 54th Annual WCJC Athletic Banquet was made possible in part by WCJC and the WCJC Booster Club.