BACK IN THE SWING OF THINGS 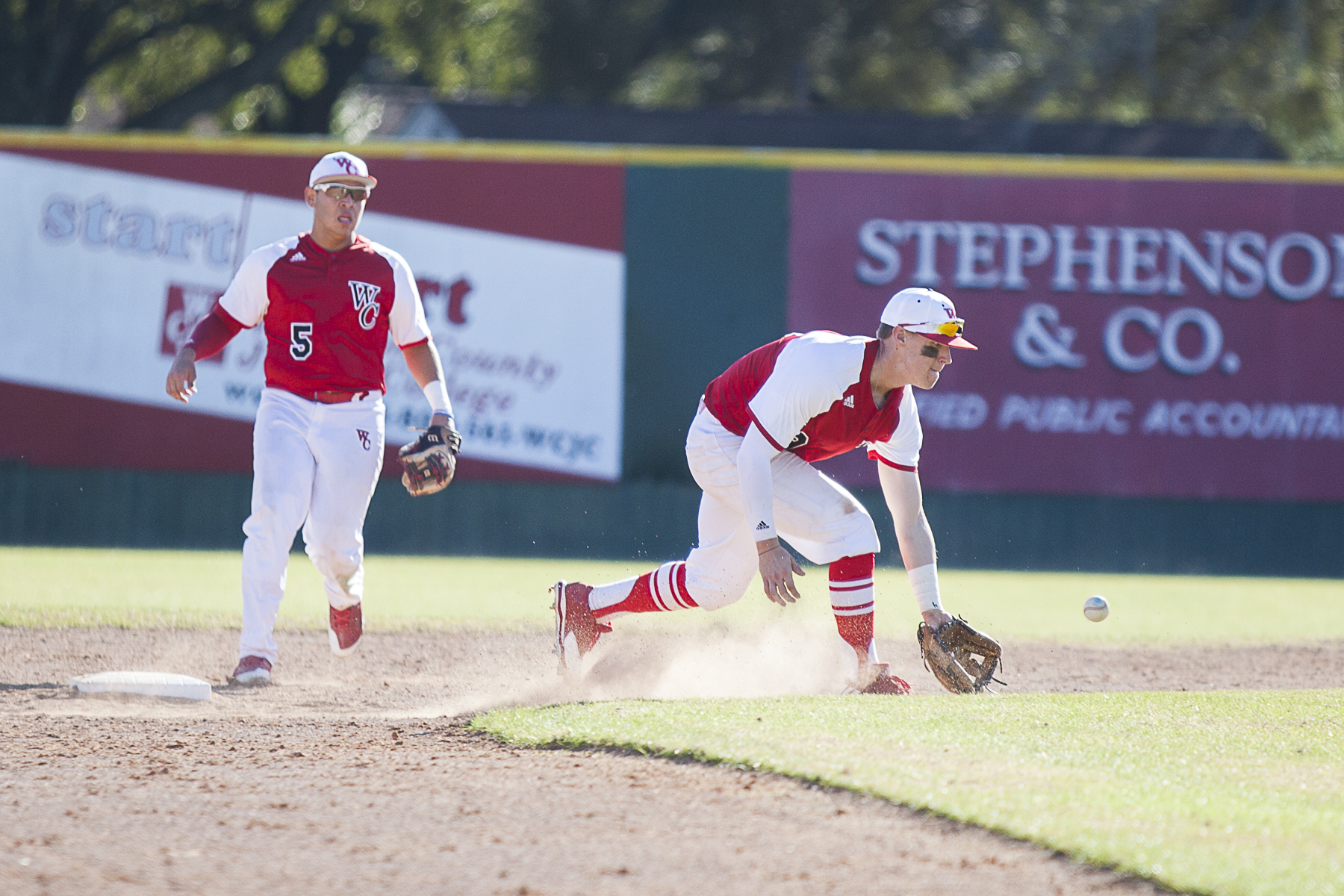 Wharton County Junior College shortstop Tyler Kimball of Pearland scoops up a line drive while second baseman Enrique Sanchez of Houston heads over to assist during the Pioneers’ season opener against Coastal Bend College on Jan. 31. The Pioneers split the doubleheader, losing the first game, 2-4, and winning the second, 5-3. They next play on Saturday against Baton Rouge Community College in Baton Rouge, La. WCJC’s next home game is Saturday, Feb. 18, against Angelina College.

The Wharton County Junior College Pioneers baseball team hopes to build upon the momentum it generated last year as it opens a new season and sets its sights on the National Junior College Athletic Association World Series this coming June.

The Pioneers just missed a trip to the NJCAA World Series in 2016, coming up short in the championship game against San Jacinto. WCJC Baseball Coach Keith Case, now in his fourth year, plans to better that result this season and guide his players all the way to the big game. But to accomplish that goal, he will have to overcome some daunting challenges – namely, a tough schedule and an inexperienced team.

The Pioneers opened the season on Jan. 31 with a home game against Coastal Bend College, splitting a doubleheader, 2-4, 5-3. The Pioneers next play on Saturday, Feb. 4 in Baton Rouge, La., taking on both Baton Rouge Community College and Weatherford College in back-to-back games. They then enter the Tournament of Champions on Friday, Feb. 10, taking on four different teams at four different locations in the span of three days.

Combine that kind of schedule with regular conference games against top-100 teams and it’s easy to see that the Pioneers are in for a long season. Although he recognizes the challenge, Case remains undaunted.

“You want to test yourself early,” he said. “I like playing that type of schedule.”

Adjusting to the rigors of top-level play and tough travel will certainly be an adjustment for the majority of the team. The Pioneers lost many of their key veterans to graduation last year and will rely upon a small cadre of returning sophomores to set the pace and provide leadership.

“We’re trying to follow up the success we had last year, but a lot of the guys are gone,” Case said. “We’ve got a lot of new faces.”

On the mound Case will lean heavily on sophomore David Leal, a 6-foot-5-inch left hander from Houston who provides the Pioneers with plenty of power. Leal has already signed to play ball with Louisiana Tech University after he wraps up this season. Case said he is still working out the rest of his bullpen – as well as some of the other key positions – and is keeping his fingers crossed that there are no major injuries. With so few veterans, an injury or two could prove significant.

Despite the challenges, Case is pleased with what he saw in the off-season and believes the Pioneers have a real chance for a winning season. He said last year’s team started slow before picking up momentum and surging ahead.

“Our team chemistry is good and I like the way our guys are approaching the work that has to be done,” he said. “Last year’s team was mentally strong and we need to get to that point. But we’ve got some players that are up to that task and can really play the game.”

For more information on the WCJC Pioneers baseball team and their 2017 schedule, visit the college’s website at: www.wcjc.edu